[edit: this page seems to be a favorite for Russian spammers because it's linked to from a lot of blogs, and lj does a terrible job of blocking spam comments these days.  I've turned commenting off.  If you wish to contact me, I'm mattbell(at)cs(dot)stanford(dot)edu or @thismattbell on twitter.  You can follow future game appearances at @giantsettlers ]

We finally finished the giant Settlers of Catan game, a few hours before we were supposed to depart for Burning Man.  The wet spray paint on the houses wasn't even fully dry when we packed it all away at 5am. 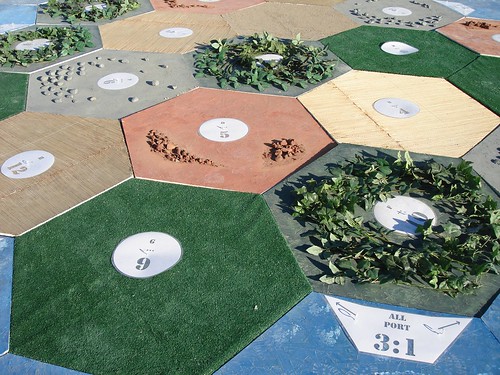 We were worried that our efforts to do Settlers as a burning man project were in vain.  Relatively few people have even heard of the game, and most people at burning man can barely rub two neurons together and run around with the attention span of a gnat.

However, we were proven wrong.

There were people coming by to play Monday morning, even before we had the damn thing set up. 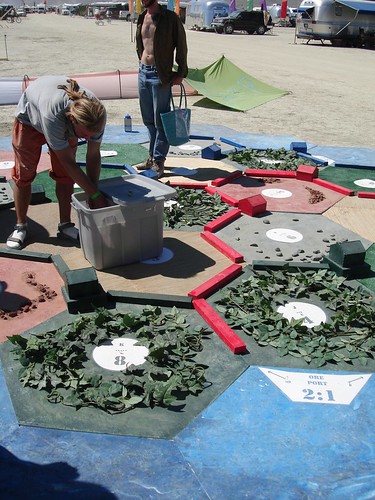 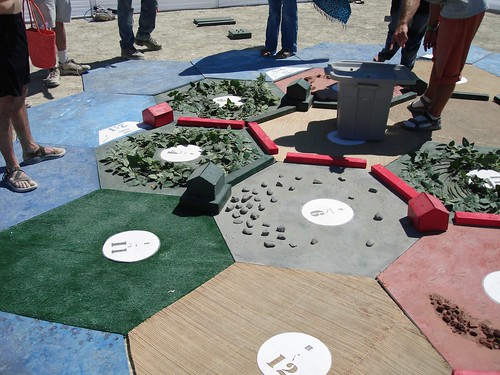 Our campmate Nathan brought a life size Bush statue to play the role of the robber.  Doesn't it make sense?  The robber steals your resources, after all.  If only you could move the real Bush to an arbitrary location far from your settlements. 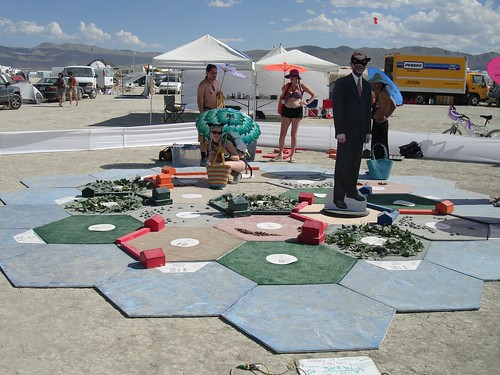 It got dusty fast.  But people didn't care.  During a heavy dust storm, we rushed back to camp to make sure pieces hadn't blown away.  Instead, we found people who were still playing... one was shouting "Does anyone have any sheep?" while wearing goggles and a dust mask.

Speaking of sheep, we decided to do resources instead of resource cards. 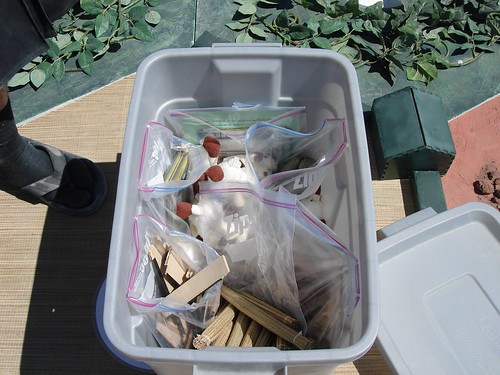 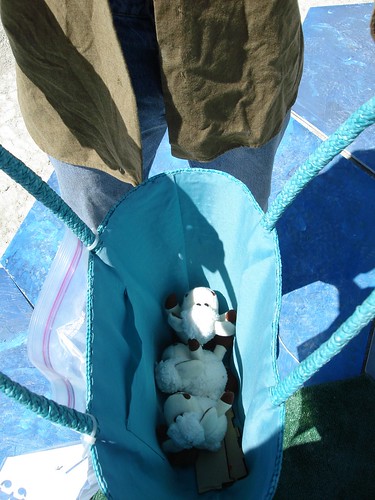 Some people noticed that since we were on the desert, we didn't need the desert hex. 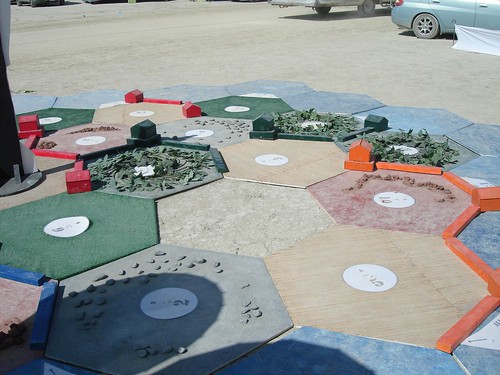 An interesting game dynamic emerged.  Unlike in the board game version, people were spread far enough apart that you could have a private conversation with another player.  We also had too many people wanting to play, so we ended up with 2-3 players on a "team".  As a result, a diplomatic wheeler-dealer atmosphere emerged, where players would huddle and discuss trades, periodically sending emissaries to speak with other players.

Overall, it was an incredible success.  Thanks for all who helped make this happen.  Thanks especially to

frogpyjamas who came up with the idea and put in at least as much work as I did, if not more.


One day the game may be as clean as it was on the night we finished it.  :-) 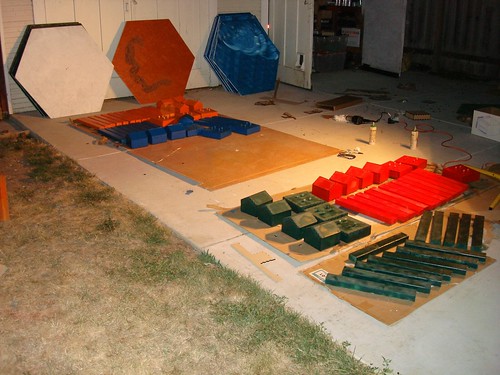 More photos of people playing can be found at:

Update:  2/28/10.  I haven't used the game in a while, and it's taking up a good bit of space in my storage locker.  Anyone interested in taking it off my hands should comment here or send me a direct message. You will need to bring a pickup truck, large SUV (the hexes are 42" wide), van, or other such vehicle to the San Francisco area to get it.

Update: 4/5/10.  The game has found a new home.  It will be appearing at various Northern California game festivals as well as at Burning Man.

Comments for this post were locked by the author